Tradition and Technology blended in Moscow

Moscow, Russia – September 2017… Having been based in its present location for more than 190 years, Moscow’s Maly Theatre is not only a cornerstone of the city’s theatrical community, but of Russian arts in general. The theatre has a formidable reputation for its production of theatre’s ’set texts’, with plays by Bulgakov, Molière and Shakespeare among those featuring in recent seasons.

But whilst its repertoire might be oriented towards the classical, the theatre’s well-earned reputation is that of an innovator, choosing the very latest technological tools to enthral its audiences. In this forward-looking context, the theatre’s management initiated a major audio upgrade project in 2011, working in conjunction with Salzbrenner Stagetec Mediagroup Russia (SSMR). Now completed, the new system is counted amongst the most advanced in the world, complete with true object-based immersive audio and adaptive room acoustics by Astro Spatial Audio.

“The Maly Theatre is a wonderful example of how a very traditional space can be augmented with object-based 3D audio from Astro Spatial Audio,” explains ASA Director Bjorn Van Munster. “One of the key benefits of our technology is that we don’t make damaging demands of the theatres, opera houses and venues in which we work – instead our technology’s inherent scalability means we can adapt to suit our environment. For a building as historic as the Maly Theatre, that means it’s possible to deliver incredible immersive experiences without unduly harming the beautiful architecture.”

Within the Maly Theatre, a core audio system based around d&b loudspeakers and amplifiers with StageTec mixing consoles is now fully integrated with Astro Spatial Audio’s SARA II Premium Rendering Engine – the heart of the Astro Spatial Audio solution.

The 3U, rack-mountable SARA II brings the creative possibilities of object-based 3D audio to live entertainment and installation projects, plus room acoustics and more, all in an easy to use package. The engine converts audio signals into audio objects, attaching meta-data to each object, including its position in 3D space, its acoustic characteristics and much more. SARA II then renders the position of each audio object in real-time within 3D space (depending on the user’s choice of room shape) up to 40 times per second. The result is a seamless, phase-free, three dimensional audio canvas.

Boasting a 2.8” touchscreen display, the SARA II includes ultra-low noise cooling, redundant on board SSD drives and up to 64 MADI or 128 Dante™ configurable network pathways, all of which are assignable to at least 32 audio objects. Browser-based access to a user-friendly GUI ensures ease of operation with simultaneous control from up to 10 devices. Crucially, the SARA II premium rendering engine is also entirely brand agnostic. 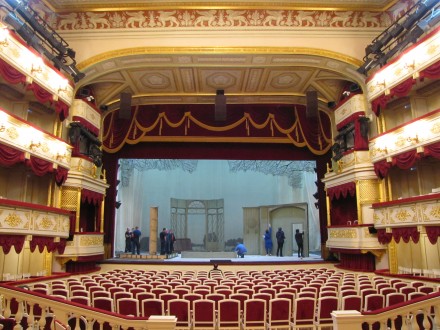 With the specification of the Astro Spatial Audio solution the theatre is planning for the long-term creative future of its productions and the opportunities that will arise from the integration of cutting-edge technology.

“This is a very innovative system and it is fair to say that the technical team is still studying the new equipment and getting to grips with its immense creative possibilities,” continues Van Munster. “It is early days, but already the quality and feature-set of the system has become very apparent to the team at the Maly, and to visiting productions and technical staff. In fact, they are filled with enthusiasm for the new technology.

“We are very proud to be part of such an important project.”